Part 5: Race as a Risk Factor

African American and Latino communities are overrepresented in the majority in communities that border hazardous waste sites within the United States. Environmental inequalities exacerbate already marked levels of socioeconomic inequality across race, for several reasons.

More than 30 years ago in 1987, the United Church of Christ’s Commission for Racial Justice released a report assessing US population demographic characteristics in areas near hazardous waste sites. Their findings, sourced from US Census Bureau and EPA data, illustrated some of the most overt examples of institutional racism by way of land zoning — 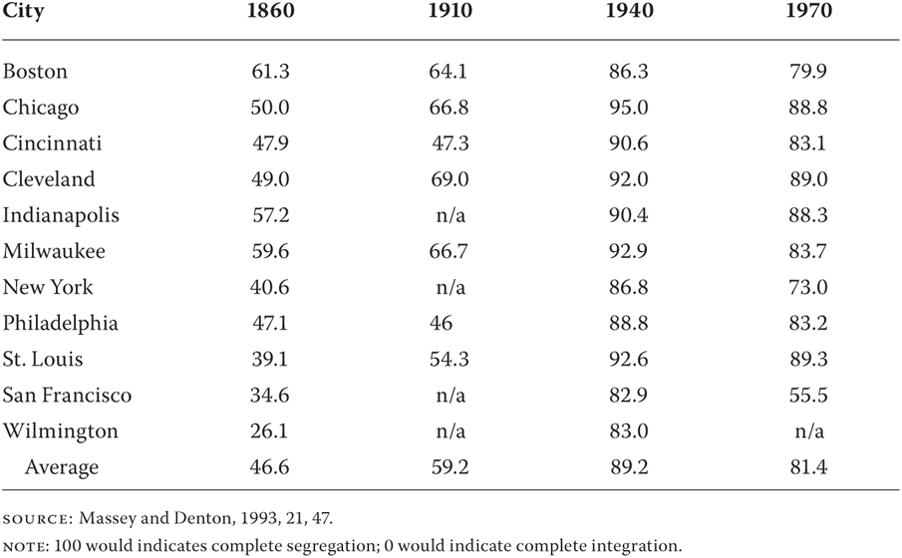 Americans who are not already exposed to these living conditions tend to not go out of their way to observe them, and thus will tend not to see the racial disparities of housing in the country. Moreover, there is a body of evidence pointing to a common misperception, one held primarily by white Americans, that the country has made far more significant strides in the realm of racial income inequality than it actually has.

A study published in 2019 by Yale University’s Institute for Social and Policy Studies surveyed a nationally representative sample of 1008 black and white adults about how they perceived the average income of a white family as compared to the average income of a black family, for 12 different years spanning from 1963 to the current year (survey responses were gathered between 2013 and 2016).

“If the typical White family had 100 units of each of five economic categories (i.e., income, wealth, employer-provided health benefits, wages among high-school graduates, wages among individuals with college degrees), how much would the typical Black family have?69

Participants responded using a 0-to-200 scale on which a response of 100 indicated racial equality¹. Analyses of participants’ perceptions of Black–White wealth disparities revealed a substantial underestimation of the racial wealth gap at all 12 time points — 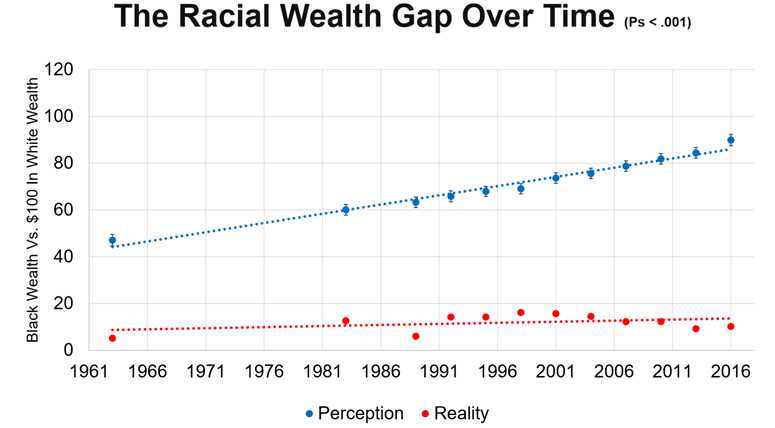 There has been a wide array of research and scholarship published over the past two decades into Americans’ perceptions and misperceptions of racial equality that show similar findings. (For example— Are Emily and Greg More Employable Than Lakisha and Jamal? A Field Experiment on Labor Market Discrimination, Bertrand & Mullainathan 2004. Ignorance of History and Perceptions of Racism: Another Look at the Marley Hypothesis, Strickhouser 2018. Simply insane? Attributing terrorism to mental illness (versus ideology) affects mental representations of race, Kunst, Myhren, & Onyeador, I. N. 2018. Toward a Social Psychology of Race and Race Relations for the Twenty-First Century, Richeson & Sommers 2016. Racial color blindness: emergence, practice, and implications, Apfelbaum, Norton, & Sommers 2012. The rules of implicit evaluation by race, religion, and age, Axt, Ebersole, & Nosek 2014. Racial formation in perspective: connecting individuals, institutions, and power relations, Saperstein, Penner, & Light, 2013. The devil is in the details: Abstract versus concrete construals of multiculturalism differentially impact intergroup relations, Yogeeswaran, Kumar,Dasgupta, & Nilanjana 2014.)

One particularly relevant observation of this specific study, though, is how one’s ‘frame of reference’ for a given exemplar of a demographic differs depending on the context—

It is possible that the same perceivers are motivated to both overestimate racial equality in the service of narratives of racial progress while also endorsing beliefs that justify the lower-status position of racial minorities, such as the overrepresentation of Black and Latinx Americans in the U.S. carceral system.69

Countless studies have shown race has far wider correlations with one’s social outcomes than does class. Race is a greater determinant than class in whether one is exposed to environmental hazards and trauma, where one lives, what schools one attends, whether one is stopped by the police, who gets arrested, who juries are most likely to convict, who is more likely to get the death penalty, and how long someone is likely to live.70

The overrepresentation of non-white residents within the most ecologically damaged and/or lowest income communities in the country is self-perpetuating. When specific populations are left with no choice but to live in a specific neighborhood, those tend to be the ‘bad neighborhoods.’ (See Richard Rothstein’s The Color of Law for a comprehensive inquiry into the topic of the lingering societal and structural inequalities that have resulted from historical racially defined zoning.)