The watershed partially or wholly encompasses twenty-two communities north and west of Boston. Its headwaters originate primarily in the Aberjona River, which flows through the suburbs of Woburn and Winchester before reaching the Mystic Lake. The upper Mystic Lake flows into the Mystic River, which flows through Arlington, Somerville, Medford, Everett, Chelsea, Charlestown, and East Boston before discharging to Boston Harbor.7 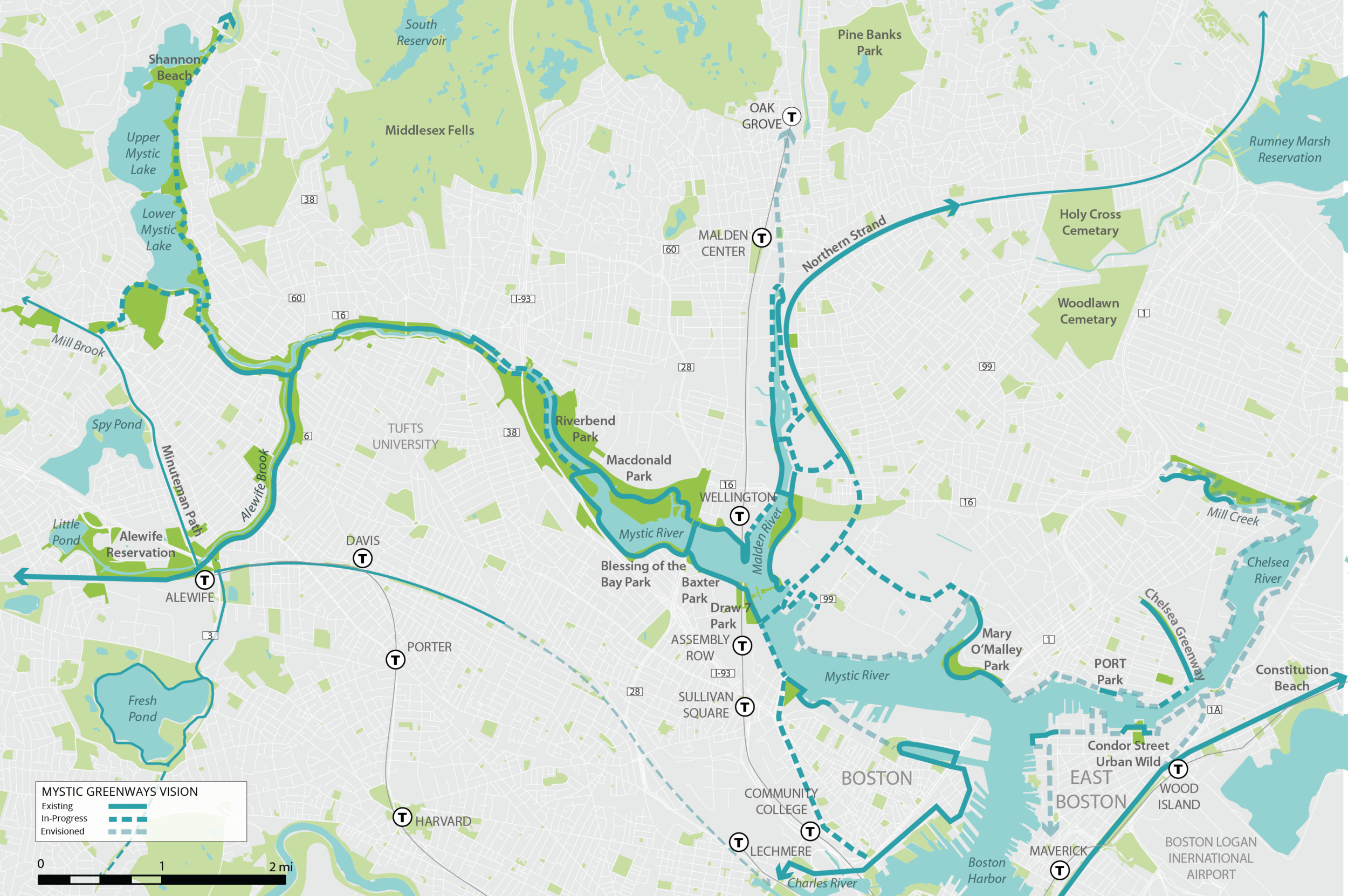 Land degradation — a decline in land quality caused by human activities — is widespread in the Mystic River Watershed. It is not possible to find a parcel of land fully undisturbed by the region’s centuries of settlement and land redevelopment. The land invariably has been tilled, landscaped, excavated, blasted, built upon, or otherwise restructured at some point in the past.

Land degradation results from mismanagement of land and thus deals with two interlocking, complex systems: the natural ecosystem and the human social system8. In The Watershed, I explore the interactions historically between these two systems within the Mystic River Watershed, while referencing various related environmental justice related events, research, politics, and regulation in the United States more broadly.

Boston’s land area includes more than 5,000 acres of man-made land — more than any other American city (except perhaps San Francisco, where the landfill hasn’t been comprehensively totaled).4 Boston’s man-made land was not the product of a single concerted effort to expand the city limits, but rather a multitude of unrelated land creation efforts over the centuries, each with its own motivations.^A

More often than not, the original fill used to create this land included contents that today would be deemed inarguably toxic to surrounding natural ecosystems. Pollutants were especially present in bodies of water known as mill ponds — manmade bodies of still water formed from building dams to reroute flowing water through a mill wheel for power. Early city ordinances would encourage, if not outright mandate that abandoned mill ponds be treated as landfills. Boston city records from as early as 1656 document the zoning of one of the city’s mill ponds as a site designated to deposit particularly noxious refuse, such as ‘beast entrails’ disposed of by butchers —

Retrieved from Documents of the City of Boston,187810

This was a standard practice in the developing city. National Geographic tells the story of Greater Boston’s largest mill pond, near what is today Haymarket Square—

In the 1640s, a group of businessmen got permission from the city to build a dam across the mouth of a cove on the northern end of the peninsula, so that they could use the tides to power some flour mills. The dam formed what was known as Mill Pond, and the mills were up and running by the end of the decade. But they were never very productive, and the whole operation was sold off to another group by the end of the 18th century.

The new mill owners closed the floodgates on the west end of the dam, which reduced flow along the banks of Mill Pond. Consequently, sewage, garbage, and the rotting corpses of discarded animals began to accumulate along the shore. It’s unclear whether letting the filth build up was part of their plan, but the new owners soon began lobbying the city to let them fill in the pond and sell off the land.5

Indeed, for many of these projects, little mind was paid to the quality of the fill itself. The land from this dam today helps support the traffic along Causeway Street, and the land on the site of the former pond itself would at the time be known as Bullfinch Triangle. A new building was promptly constructed on the filled land to house the delightfully titled organization, The Society for the Propagation of the Gospel among the Indians6 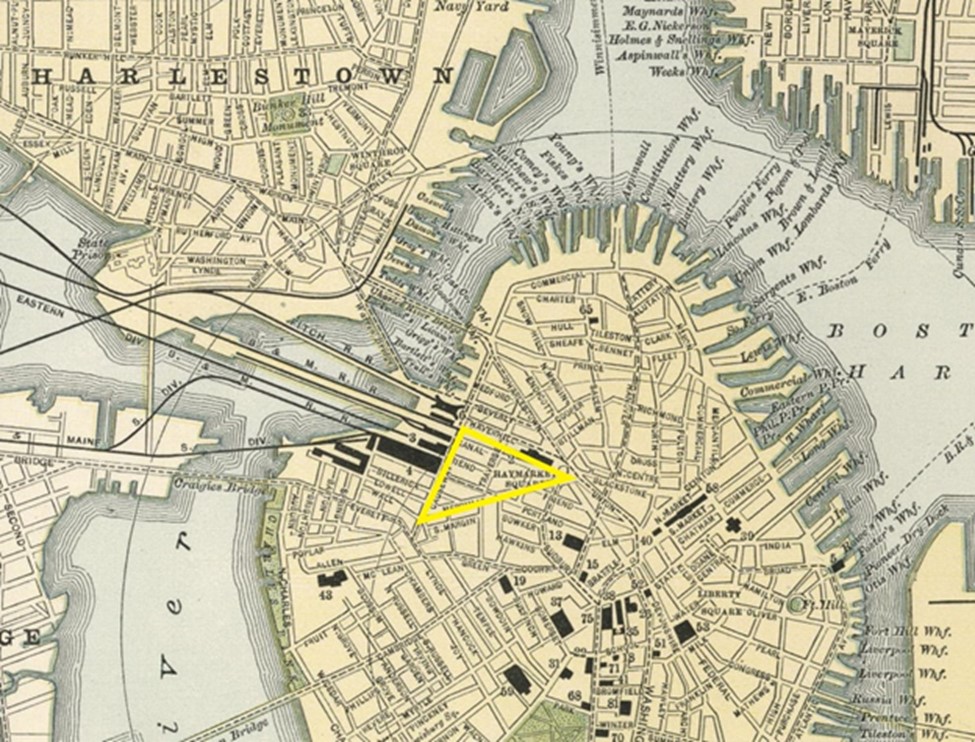 Independent of the environmental consequences, the man-made land quickly proved to be ill suited for urban infrastructure. The first ‘made’ land involved dumping sand and gravel on top of Boston’s mud flats, quickly leading to the realization that heavy structures could not be constructed on top of it.

By the turn of the 20th century, city planners had adopted a new strategy for building on the loosely packed land. Laborers would drive wood pilings — essentially vertical logs about the size of telephone poles — through the filled land and underlying organic silt layer (the original mud flats), 15 to 20 feet below existing ground surface12. 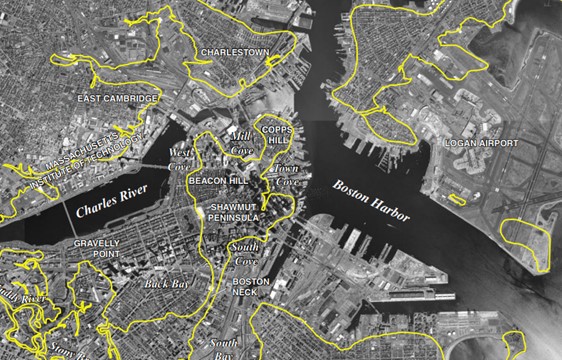 The estimated 1630 Boston shoreline, overlying a 1999 satellite map of Boston and surrounding areas12,13

The wood-piling method of building on top of wetlands introduced new problems for the city as it grew. While the method can be structurally reliable for centuries if left undisturbed, it requires that the groundwater level at no point dips below the tops of the wood pilings. Wood rots at a much slower rate when submerged in environments low in oxygen, and groundwater has markedly lower oxygen levels than water on the surface. As long as the groundwater level never dipped below the tops of the submerged wood pilings, the pilings could theoretically remain sturdy for generations14.

Unfortunately, like most cities, much of Boston’s infrastructure has been built out beneath the ground water level (subways, sewers, tunnels, etc.). When any of these structures are punctured, such as a tunnel springing a leak, the groundwater will drain into it — exposing the submerged pilings to air. The most well-publicized examples of this occurred as a result of the nation’s most expensive highway project ever, Boston’s Big Dig. While the Big Dig is a topic outside of the scope of The Watershed, infrastructure projects like it are one contributing factor to land degradation in the Mystic River Watershed.

This environmental deterioration likely has increased the impacts felt from chemical pollution in the region.

Boston pioneered and remains today a hub of innovation for the chemical and biotechnology industry. Throughout much of the history of the biotechnology sector’s evolution, regulation has lagged well behind innovation. This is perhaps most evident with respect to regulating manufacturing processes in order to minimize the creation of toxic byproducts. Glenn Nedwin, an accomplished biochemist and co-editor in chief of the journal Industrial Biotechnology, described the challenges presented by early innovations in the biochemical industry at a 1997 conference—

Since the beginning of the Industrial Revolution in the 1700s, industry has not consistently paid attention to the environmental impact of its operations. This inconsistency has grossly intensified since the early 1900s due to a number of complicating factors, including competition driven by capitalism, technological advancements and the need to sustain an increasingly rapid growth in population. Today we are faced with an inordinate number of toxic waste sites due to industrial carelessness and little attention has been paid to energy and resource efficiency.

Historically, most known synthetic reactions were developed primarily on the basis of product yield, with little or no regard for the toxic nature of the starting materials, catalysts, solvents, reagents, byproducts, or impurities. Further, in many instances there was an incomplete technical understanding of the process, no stated set of emissions or waste parameters for operating, lack of detection systems, and in some cases, instances where arrogance, neglect, and greed took over.15

The class structures of each of the Mystic River Watershed’s communities have evolved over the past 200 years, with residents of the cities closer to the harbor today typically experiencing greater levels of economic hardship. Throughout this period, the watershed has withstood a tremendous degree of ecological destruction, amassing an accumulation of hazardous industrial chemical waste deposits spanning generations.

As will become evident in the subsequent chapters, the combination of land degradation and toxic runoff has come to define the racial disproportionality of these communities.

Extensive information about the making of Boston can be found in Michael Rawson’s Eden on the Charles.